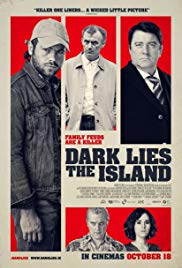 Synopsis: Our Opening Night film is dark, twisted and very, very, Irish. Based on his own short stories and adapted for screen by Irish playwright, Kevin Barry. If you’re going to get involved with men in the town of Dromord, they might as well be Mannions – and Sara is involved with them up to her neck. She’s married to Daddy Mannion, who is more than 20 years her senior and who more or less owns and runs the town. But her first love is his estranged son, Doggy Mannion, who is by now a criminal recluse living in the woods outside the town. Then there’s the younger brother, Martin Mannion, a small-town Lothario and failing chicken farmer, and yes, Sara has just got involved with him too. As a result of this tangled erotic web, jealousy is rife in Dromord, and it’s flinging out its spears in all directions. The Mannion men have been set at each other, their long truce cannot hold, and serious violence is threatened – will we get through the next few days without bloodshed?

Rotten Tomatoes: “It all adds up to a deliciously Fargo-esque delight that can’t end well…”

Screen Daily: “A blend of down-and-dirty dialogue with cinematic sophistication is fronted by a committed cast…”

Film Ireland: “A doomed love-rectangle in a small Irish town with solid performances and gorgeous cinematography…”